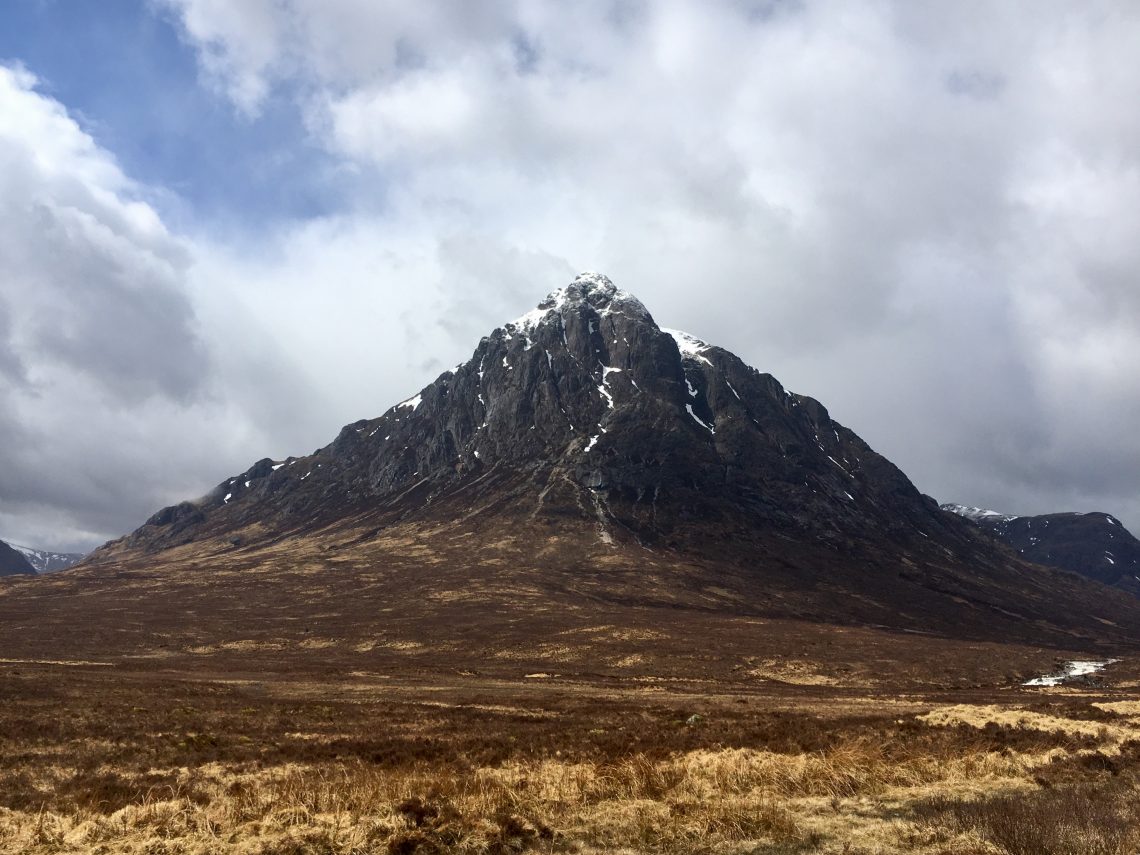 I was born and brought up in Scotland and have travelled the country widely, both as a child and with my own children. It’s a great destination for families. A perfect combination of cosmopolitan cities like Glasgow and Edinburgh, with majestic landscapes just a stones-throw away. Edinburgh is the capital of Scotland, its historic heart, while Glasgow is its edgier sibling. Which is best? I’ll let you decide in our destination guide for Scotland.

Getting There and Getting Around

Both Glasgow and Edinburgh are served by flights from a number of international airports. If you can’t find a direct flight, London is a simple connection. Of course, your visit may be part of a bigger trip to the UK. In which case, Scotland is easily reached by road and rail from England.

While it is easy to travel between the major cities by public transport, hiring a car gives you more freedom and allows you to go off the beaten path. Scotland is perfect road trip territory and is compact enough that you won’t be driving for hours.

Edinburgh: the city with a castle built on an extinct volcano. A wonderful place to explore by foot, you can walk through the old city from the castle down the Royal Mile to the Palace of Holyroodhouse. Make sure to check out the ‘closes’ (alleyways) as you go.

Edinburgh is also home to the world famous Edinburgh Festivals held annually in August. The Festival incorporates the highbrow International Festival, the chilled out Fringe Festival and the Royal Edinburgh Military Tattoo, amongst others. It is a great time to be in the city, with entertaining street performers and productions especially for families.

There are a number of other attractions which appeal to children including the Museum of Scotland, the Royal Yacht Britannia, Edinburgh Zoo (where you can see the UK’s only Giant Pandas) and Dynamic Earth. 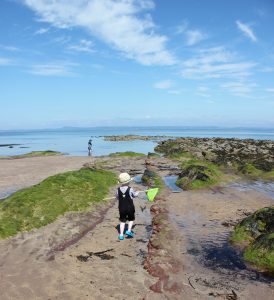 If the weather is behaving, then catch the train to the nearby coastal town of North Berwick. It has some beautiful sandy beaches, spectacular golf courses (one of which even has a nine hole children’s course) and the chance to spot some birds at the Scottish Seabird Centre. 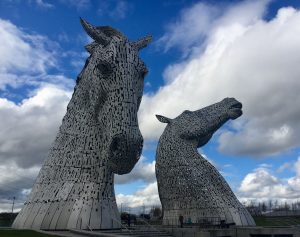 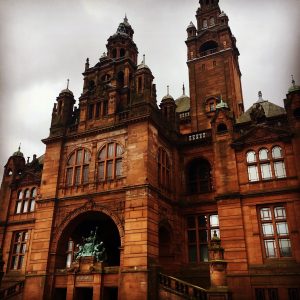 After you have taken in the historic delights of Edinburgh, you should hotfoot it one hour west to Scotland’s cultural capital. Home of a huge number of live music venues and theatres, Glasgow is also the focus of Scotland’s art scene. Teens will love it’s vibrant atmosphere, but don’t think that I’ve forgotten about younger kids. There are loads of attractions for them too, especially Kelvingrove Museum and Art Gallery, the Riverside Museum and the Glasgow Science Centre. 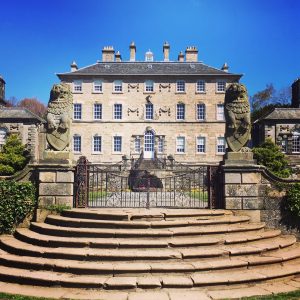 Just outside the city you will find Pollok Country Park. As well as having lots of paths to explore, you can visit the Burrell Collection (closed until 2020 for refurbishment) and Pollok House, a Georgian mansion. You’ll forget you are only 15 minutes from the city centre. 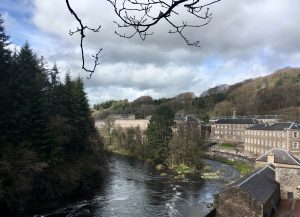 A day trip from either Glasgow or Edinburgh is New Lanark, an historic mill village, one of Scotland’s UNESCO World Heritage Sites. When it was founded in the 18th century, New Lanark was a groundbreaking example of a model village where concern for the workers’ well-being was integral to its operation. Once you have enjoyed the visitor centre and explored the village, don’t miss the riverside walk to the Falls of Clyde. 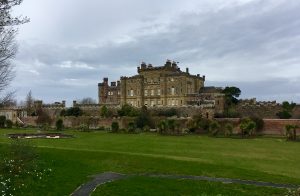 An hour’s drive south of Glasgow you will find Culzean Castle and Country Park. Culzean is a magnificent castle overlooking the Firth of Clyde in Ayrshire. This castle has an unusual connection with the US. An apartment at the top of the castle was gifted to General Eisenhower for use as a holiday home in honour of his role as Supreme Allied Commander during WWII. Within the country park there is an absolutely enormous adventure playground, which your kids will love! 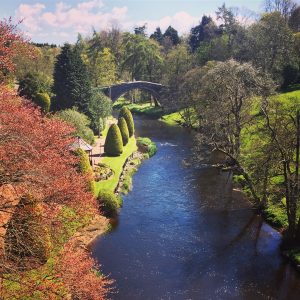 Not far from Culzean is Alloway, the birthplace of Scotland’s national bard, Robert Burns. Children will enjoy discovering the genius of Burns’ poetry in the family-friendly visitor centre and can learn about his early life in the Burns Cottage. It is well worth spending a few hours exploring the beautiful Ayrshire village.

Stirling is sometimes neglected in the battle for supremacy between Glasgow and Edinburgh, but this city in Central Scotland in absolutely worth a stop on your way up to the Highlands. It was once the capital of Scotland and it has a wonderful castle overlooking the city (again built on a mound of volcanic rock!).  Stirling Castle is often much less busy than its more famous neighbour in Edinburgh. 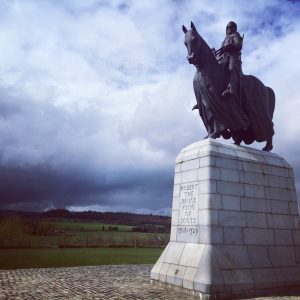 Make sure you don’t leave Stirling without visiting the site of the Battle of Bannockburn. Now I know that this doesn’t sound like the kind of place your kids will enjoy, but the visitor centre hosts an immersive 3D experience. You are put at the heart of the battle before taking part in an interactive battle game in the Battle Room. Trust me, your kids will have great fun learning about Scottish history, without even realising it!

The majestic Scottish Highlands are just as beautiful as you imagine them to be. The mountainsides clothed in heather; the lochs deep and mysterious; the history both glorious and tragic. 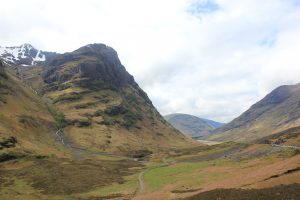 A perfect example of this can be found at Glencoe, one of the most impressive mountain passes in Scotland. You can visit the National Trust for Scotland visitor centre, where you will learn about the glen’s geology, ecology and history. Next, stretch your legs on one of Glencoe’s many walks. Whether you want to ‘bag a munro’ or just have a gentle stroll, there is something for everyone.

If you have a Harry Potter fan in your family, you can’t leave the Highlands without taking a ride on the ‘Hogwarts Express’ aka The Jacobite. The Jacobite leaves from Fort William station along the scenic West Highland line, crossing the famous Glenfinnan Viaduct (which all Potter fans will recognise from the movie) on its way to the small fishing village of Mallaig. Don’t forget to bring your camera because the views are fabulous!

An hour north of Fort William, head to Loch Ness to try to spot the famous monster. If you don’t have any luck with Nessie, console yourself with a visit to the beautiful ruins of Urquhart Castle.

Travel for another hour and you will reach Inverness, capital of the Highlands. Built on the banks of the River Ness, this pretty city is worth a visit. On the outskirts of town you will find the site of the Battle of Culloden, where Bonnie Prince Charlie and the Jacobites failed in their attempt to reinstate the Stuart dynasty to the throne. Fort  George is about 20 minutes outside Inverness and is a remarkable 18th century fortress. Built in the aftermath of the Jacobite rising, it’s still an active army base. You are able to visit the Fort, although parts of it are closed to civilians. Located on the Moray Firth, you may be lucky enough to spot dolphins from the ramparts.

Aberdeen is the third biggest city in Scotland and is home to many handsome grantite-built buildings. Beyond the city, you will find Scotland’s Castle Trail with 19 castles you can visit. Some are ruins, but a number of them are intact with opulent interiors. The most famous of these is Balmoral Castle, Scottish home of the UK’s Royal Family. As a result, the castle is only open when the Family is not visiting.

St Andrews is world famous as the home of golf and golfers from around the world make a pilgrimage to play on the Old Course. Aside from golf, St Andrews is worth a visit for its pretty beaches and historic buildings, a lot of which are part of the town’s university: the English speaking world’s third oldest. 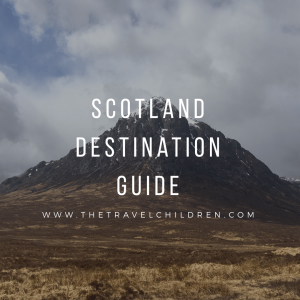