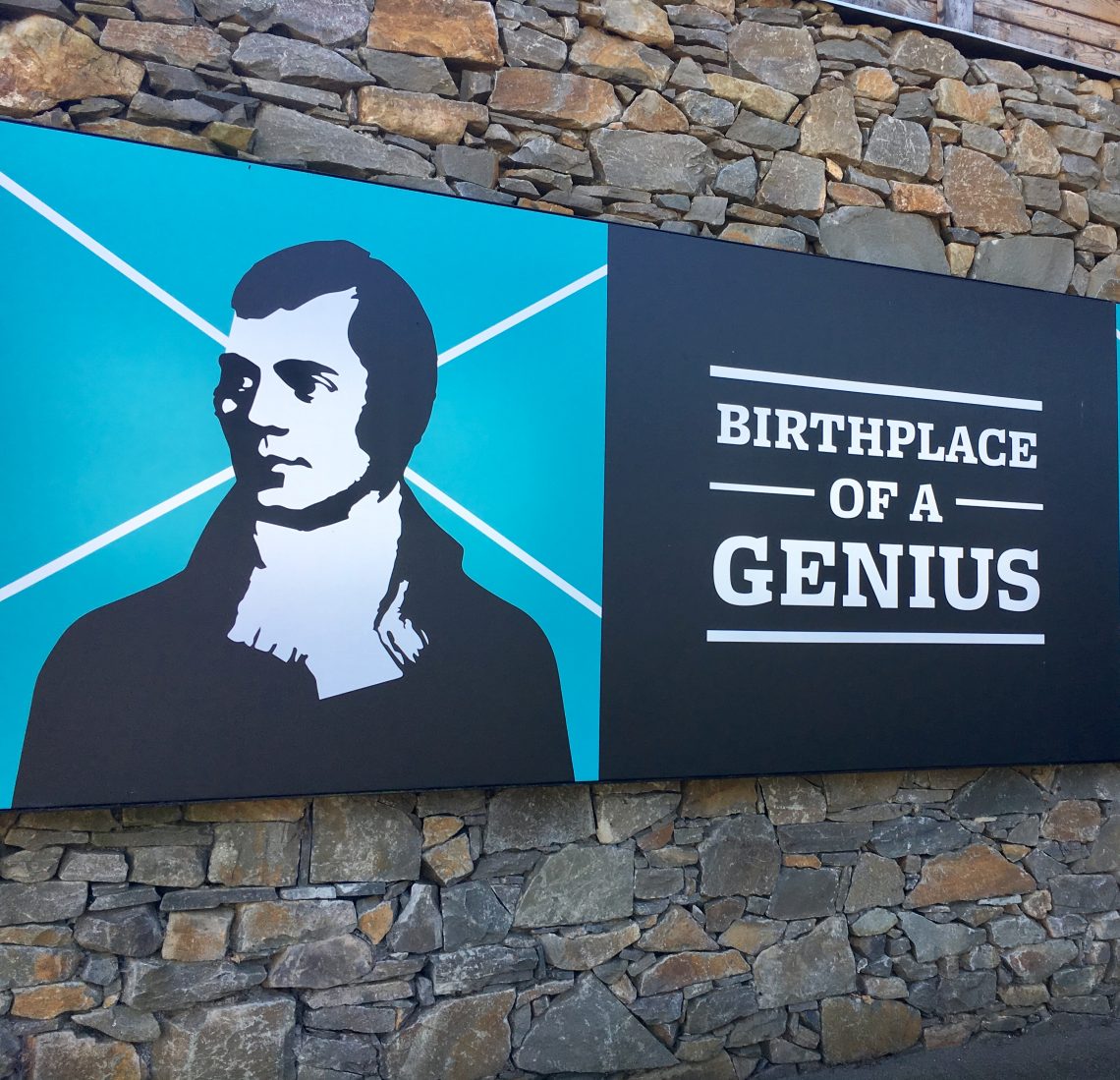 Every year on 25 January, Scots the world over dig out their poetry books, address a haggis, and make toasts to the lassies and laddies. This annual event is known as Burns Night, a celebration of the life and works of Robert Burns. But who was he? Join The Travel Children as we visit Robert Burns country to find out more about Scotland’s national poet. Then, discover how easy it is to enjoy a traditional Burns Supper in your own home.

Who was Robert Burns?

Robert Burns was born on 25 January 1759 in the Ayrshire village of Alloway. The son of a farmer, Burns was mostly educated at home and his schooling was often interrupted by the necessity to assist with farm work. Despite the lack of any real formal schooling, he became a prolific poet writing in both English and Scots. His influence on Scottish literature has led to him being regarded as a cultural icon in Scotland. Elsewhere he is perhaps best known as the writer of ‘Auld Lang Syne‘, which is often sung on New Year’s Eve as we bid farewell to the old year.

The best way to get to know Burns, however, is to explore the places he knew best and which inspired his work. And where better to start any exploration of Robert Burns’ life than in his birthplace of Alloway.

The Robert Burns Birthplace Museum provides a great introduction to Burns for novices. Walking through the exhibition at your own pace, you can both read and listen to his work. It is entertaining and educational for younger guests too, with interactive exhibits and games. There are also intriguing personal items belonging to the bard on display, like his portable writing kit. One can’t help but wonder what great works he composed with this kit!

Another highlight for children is the ‘Scots Wa-Hey’ play area. This park includes a mini Burns Cottage and a climbing frame modelled on Alloway’s Auld Kirk. It is located next to the Bard’s Bakery and Café which has outdoor tables, so you can keep an eye on your kids while enjoying coffee and cake! If the weather isn’t cooperating, then there is a children’s corner inside the café.

Suitably refreshed, a path leads from the play area into the neighbouring gardens. The highlight here is the 70 foot high Burns Monument, completed in 1823 in memory of the great man. The gardens are a delightful place to wander on a nice day. From its elevated position, the gardens provide you with a great view of the Brig O’Doon, the next stop on our tour.

Following the path down through the bottom of the gardens, you will soon come to the Brig o’ Doon. This 15th century cobblestone bridge over the River Doon is the setting for ‘Tam o’ Shanter‘. If you are not familiar with this poem I strongly recommend that you take a look. It is a cautionary tale for those who may partake of one drink too many and encounter witches and warlocks on their ride home! A particularly good photo of the Brig o’ Doon can be taken from the road bridge next to the Brig o’ Doon House Hotel. If you didn’t eat in the museum café, the hotel serves tasty meals in pleasant surroundings.

Heading back up the main road away from the river, you will reach the ruins of the Auld Kirk (old church). Built in the 16th century, the church was already a ruin when Burns wrote about it in ‘Tam o’ Shanter‘. It was here that Tam first saw the “warlocks and witches in a dance“. In such an atmospheric spot, it’s not hard to imagine!

Robert Burns’ father William and his sister Isabella Burns Begg are both buried in the kirkyard. It is worth spending some time here exploring the intricately carved gravestones, before continuing further up the road to the Poet’s Path.

This walkway connects the main museum site with the Burns Cottage and is home to a larger-than-life ‘tim’rous beastie‘, amongst other sculptures!

Robert Burns was born in this thatched cottage, which was built by his father in 1757. It is a simple two room building that highlights Burns’ modest background and the poverty of his early life. Outside the cottage you can see the land that his family worked so hard to farm.

All of the above locations are in the village of Alloway. However, there are a couple of other sites not too far away if you wish to continue your exploration of Robert Burns country.

The Bachelors’ Club in Tarbolton is just 15 minutes north-east of Alloway. In this club, co-founded by Burns, he socialised and debated with his male friends. The ’10 Rules of Membership’ drafted by Robert includes a commitment that “Every man proper for a member of this Society, must have a frank, honest, open heart; above anything dirty or mean; and must be a professed lover of one or more of the female sex“!

Souter Johnnie’s Cottage was the home of ‘souter’ John Davidson, a shoemaker. It is reputed that he was the Souter Johnnie of Tam o’ Shanter fame. In the garden is a thatched model tavern with life-sized sculptures of Tam, the souter and Nance Tunnock. The cottage can be found in Kirkoswald, 15 minutes south-west of Alloway.

If you aren’t lucky enough to be attending the Burns Supper being held in his cottage to celebrate his birthday, do not despair. You can easily host your own Burns Supper at home.

The crucial component of any Burns Supper is the haggis, “great chieftain o’ the puddin’-race“. Haggis is a tasty blend of sheep heart, liver and lungs, mixed with onion, oatmeal and spices, cooked inside a sheep’s stomach! Despite this horrific list of ingredients, haggis is actually delicious and is traditionally served with neeps (swede) and tatties (potatoes). For those of a more squemish disposition, vegetarian haggis is a suitable alternative!

Surprisingly haggis can be purchased in a number of countries throughout the world, especially those with a large Scottish expat community. The Travel Children currently live in Australia and we bought a David’s Larder haggis from our local butcher. Have a look online or speak to a butcher to see what is available in your area.

Once you have sourced your haggis, it’s time to start practicing your ‘Address to a Haggis‘, composed by Burns in appreciation of this most Scottish of dishes. It is traditional for the haggis to be piped to the table but if you don’t have a bagpiper in the family, you will find plenty of bagpipe music on YouTube! Before you start tucking into your haggis, don’t forget to say the Selkirk Grace:

“Some hae meat and canna eat,
And some wad eat that want it;
But we hae meat,and we can eat,
And sae the Lord be thankit“.

Bringing festivities to a close, it is traditional for all those in attendance to link hands at the end of the night and join in the singing of Burns’ most famous composition, ‘Auld Lang Syne‘

What are you doing to celebrate Burns Night? What is your favourite poem? Let us know in the comments below.